Dear Sir
Dhaka North City Corporation has taken an initiative to create an integrated “blue network”, connecting and reviving all the canals in 18 newly added wards to resolve the city’s perennial water logging problems. A project to build the network has already got ECNEC approval and a study has also been carried out in this regard.

This is a challenging job but it will be done and encroachers will be evicted. An expert committee has already been formed to make people aware. The Executive Committee of the National Economic Council (Ecnec) has approved a Tk 4,025 crore project, including road construction and the “blue network”. Under the new initiative, the DNCC will now develop the Naria-Beraid canal. DNCC will demarcate the canal, excavate it to increase navigability, and re-establish interconnectivity between different parts of the water body.

In the project, there are plans for walkways and bicycle lanes along the two banks of the canal. Seating areas, tents, parks, floating decks, children’s playgrounds and terminals have also been designed. We hope the project will be implemented properly. 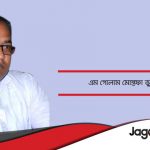